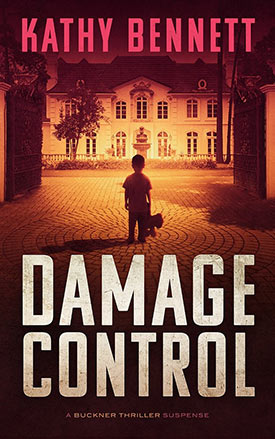 L.A.’s mean streets—filled with vulnerable children. Some are stolen.

Los Angeles Police Officers, Amber and Roy Buckner, want to end their marriage amicably, while diminishing the fallout of the split for their three-year-old son, Gage. But those plans get placed on hold and their lives upended when Gage goes missing.

Anger and fear replace the cordial relationship they’d crafted during their separation, and bitter resentment ignites as the investigation reveals they were both culpable in their son’s disappearance.

Word on the street is that a notorious pimp is selling young children to the highest bidder. Roy and Amber must delve into the depraved world of child trafficking and prostitution to have any chance of saving their son. Can they beat the clock before their son is gone forever?

“Are you sure this is what you want?”

Roy Buckner gave a reluctant shrug with one shoulder. “I don’t have much say in the matter. Amber decided she wants a divorce. I can’t make her stay married to me.”

The lawyer glanced at the papers before him, then glared at Roy. “Yeah, but you don’t need to bend over for her either.” He shook his head. “You’re being extremely generous.”

The litigator held up his hand. “I know, I know. You screwed another woman, your wife found out, left you, and so it’s all your fault.” He crossed his arms on the desk, leaning closer. “I’ve been handling cop divorces for well over a decade. In my experience, it takes two people to break a marriage.” He grimaced and sat back. “Heap on what the two of you went through the last couple of years…” he shrugged. “Why give her the house, child support, plus pay for her car?” The counselor leveled his gaze on Roy. “You’ll be living in a cardboard box on Skid Row trying to pay for all of that—or kill yourself working overtime and off-duty jobs. She’s got a good job with good pay and benefits.” The attorney shook his head again. “If you ask me, you’re making a foolish decision.”

Roy flashed a wry smile. “Foolish decisions seem to be my forte. No sense in changing things now.”

As the early morning sun came through the window, Amber Buckner listened to the metronome-like beats from the clock on her shrink’s desk. They mirrored the beat of her heart.

“I think I made a mistake leaving Roy.”

Doctor Angela Stevens glanced at the yellow legal pad on her lap. “You’ve been separated for what…eighteen months?”

The psychologist crossed her legs. “So why, after a year and a half, are you reconsidering your decision?”

“I’ve had time to reassess everything—the Seth Farley situation, me becoming a cop, and Roy’s affair.”

“Okay, and how has that reevaluation changed your view?”

“I realized I was doing what was best for me, but what about Gage? He’s only three. He needs his daddy.”

“There are plenty of children growing up in single-parent homes, and they turn out just fine.”

“Many don’t!” She clenched her teeth and shook her head. “Maybe I acted too fast.” She sighed and cast her gaze around the room, as if the answer was in a corner somewhere, then returned her focus to her shrink. “Being a cop changes your perspective…of everything. Before my kidnapping, I faced plenty of pressure. As a Neo-natal ICU nurse, I had physicians yelling, mother’s panicking, babies stopped breathing…I often made life and death decisions. And that stress was real and critical.”

She readjusted the pillow under her left arm. “When I graduated from the police academy, I knew interacting with the public would be stressful, frustrating, and dangerous, but I didn’t realize how much of the frustration, mental strain, and anxiety would come from inside the department. A cop in today’s world is in a no-win situation.”

She looked into the other woman’s eyes. “I feel some compassion for Seth Farley. He thought the LAPD had wronged him. It wasn’t true, but now, with my experience as an officer, I can see how he might have perceived he was a target.” She rubbed her hands together. “My whole family still suffers from the ordeal.” She blew out a breath, relieved she’d been able to articulate her thoughts.

The doctor nodded. “Okay. How does all of that relate to any uncertainty about leaving your husband?”

“Because, now that I wear a badge, I understand he needed…relief.”

The other woman smiled. “Do you think all police officers who face extreme stress, or hardships on the job and in their personal life, need relationships outside of their marriage to cope?”

“I can’t speak for them. I only know Roy is a decent man. Yes, he cheated on me. He said it was only twice, and I think he’s being truthful. I wasn’t available to him sexually, and he found someone who was. His partner was hurting as much as he was—for different reasons, but Katie was just as damaged. She was willing to be intimate, while I rejected him. I don’t like it, but I understand why it happened. I’ve forgiven him, and I want him back.”

“Will you have an issue trusting him?”

“Absolutely. I’ll need your help.” Amber gave the doctor a crooked smile. “And…that’s why you make the big bucks.”

On Thursday morning, Roy Buckner moved with purpose. He wasn’t used to having his three-year-old son on a workday. “Okay, buddy, finish your cereal and apple slices. We’ve got to get going. Daddy will be late for work.

The little boy clutched a handful of oat circles and jammed the contents of his hand against his open lips. Most of the pieces fell onto the table.

“Good job, son.” He smiled. “Don’t be afraid to use your fingers to put the cereal into your mouth.”

Gage reached for his sippy cup and swallowed several gulps of milk. He grinned, then grabbed a fruit slice and bit off a piece.

“You keep eating. Daddy has to brush his teeth and grab a tie.”

Half an hour later, they were on their way to the three-year-old’s preschool. As they slogged through morning traffic, he pointed out yellow buses packed with children, sleek sports cars, and crossing guards shepherding youngsters through the vehicles.

“Poweece,” Gage said, pointing at a black-and-white ahead in the lane next to them.

“That’s right, son. Those officers probably just came on duty, and they’ll be working the whole day—even past the time Mommy comes and gets you.”

From his safety of his car seat, the toddler clapped his hands.

“Mommy will pick you up this afternoon. You’ll spend the night with her, and then Daddy will come for you tomorrow morning. How does that sound?” Roy glanced at his youngster in the rearview mirror.

As he pulled into the parking lot of the school, he wondered how the screwy schedule he and his estranged wife maintained affected their son.

Roy felt better after walking his son to class, when Gage threw his arms around his father’s legs, tilted his head up for a kiss, and as soon as he finished, ran to join a group of kids building a tower of wooden blocks.

Back in his pickup truck, knowing his son was safe and happy, Roy shifted his thoughts to his caseload of sex offender registrants.

Over the past four months, three young boys had disappeared from the San Fernando Valley. His position as the coordinator over the department’s Sexual Assault Units, had made him the logical first stop, and he’d asked the detectives working Missing Persons to meet with him.

Hopefully, between them, they would have some good ideas for finding the boys.

Monroe Peck, AKA Dazzle McDaddy, rubbed his hand over his face trying to energize his brain for the long drive back to Los Angeles.

Looking in the rearview mirror, he watched eleven-year-old Brooke Desmond take a bite of the In-N-Out burger he’d bought her just north of Salt Lake City.

The girl sat in the backseat of his black Escalade, while Payton, her fourteen-year-old sister, sat up front next to him shoving french fries into her mouth.

He gave the older girl a sidelong glance. “You might want to go a little easier on those fries. They pack on the pounds.”

She dropped the crispy strips into the cardboard box holding her hamburger and the remaining greasy potatoes.

“Yes. You’re right. I’ve just never had a hamburger or fries that tasted so good.”

Dazzle looked into his rearview mirror again. “What about you, little one? Do you like your burger?”

The little girl nodded and took a sip of soda.

Neither girl said much, and after the carb overload wore off, they were fast asleep.

Traveling south on I-15 through Utah, the least-populated portion of the trip, Dazzle struggled to keep his eyes open. As tired as he was, he knew he couldn’t stop. He had to get to Vegas, and then LA.

He’d left the rest of his girls in a motel on Flamingo Road on the east side of Vegas. He’d been gone too long.

Who knew what kind of trouble a bunch of unsupervised whores could create?

They were about a half hour outside of Cedar City when Payton woke up. A huge yawn contorted her face.

That one is the moneymaker. He used the rearview mirror to smile at the younger girl. “It won’t be long, and we’ll be out of Utah and into Nevada. I told you girls I’d show you a good time, and there isn’t a better place to have fun than in Las Vegas.”

Brooke rubbed the sleep from her eyes. “When do we get to go home?”

“Home? Why would you want to go home? I’m taking you to one of the most exciting places on Earth. I’m taking you to Las Vegas.” He grinned. “I’ll take you to Circus Circus, and at New York-New York they have a cool roller coaster to ride. It’ll be a ton of fun. You’ll see.”

In the passenger seat, Payton turned toward him. “Do you think we can play some slot machines? One time, a girl from school got all dressed up like a grownup, and she got to play some slots before the security guards made her leave.”

“No. Not this trip. Sometimes my business takes me to Vegas,” he said, glancing at Payton. “Of course, I’d want you to come with me.”

As he knew she would, the girl beamed.

He looked over his shoulder at the young one. “I’d want you to come, too.”

That’s okay, little one. He wasn’t worried. He’d bring her along slow. Eventually, they all came around…one way or the other.